From “United” to Greater Jerusalem: Annexation 1967-2020 A New Map and Analysis

Ir Amim is releasing a new map which shows the planned Israeli annexation around Jerusalem according to the Trump Plan.

Many signs show that ‘Greater Jerusalem,’ or at least part of it, is to be included in the 2020 official Annexation plan.  Moreover, in the wake of pressure from both at-home and abroad, substitute proposals for a so called ‘minor annexation’ expected to occur within ‘Greater Jerusalem’, have been suggested.  However, the consequences of a ‘minor annexation’ are not minor at all.  ‘Greater Jerusalem’ penetrates deep into the West Bank, effectively splitting the area in half. Annexation will only fracture it further into additional enclaves.  Even without other steps towards annexation, ‘Greater Jerusalem’ alone severely sabotages the chances for a two-state solution and denies Palestinians the right to self-determination.
Please see below further analysis and detailed explanations regarding the direct ramifications of annexation around Jerusalem.

The map can be downloaded from this link. 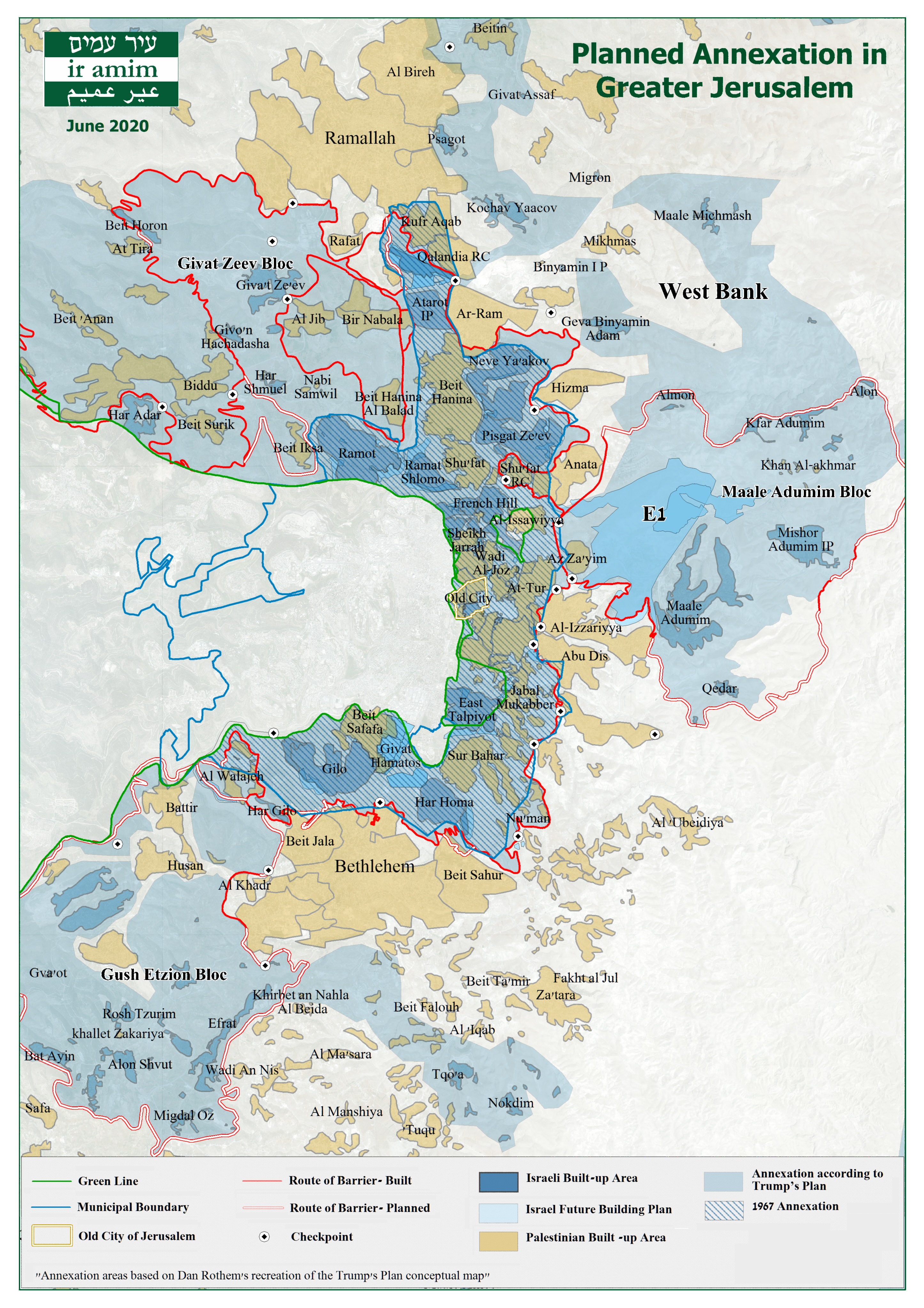 As out analysis below will show, any "small" annexation in Greater Jerusalem will actually have dramatically negative impacts:

Erosion of the Palestinian space around Jerusalem
Around Jerusalem, annexation will reach deep into the West Bank and include areas on both sides of the Separation Barrier. It will turn the Palestinian space around the city into a twisted "fractal" form that continuously breaks up into isolated enclaves: to the north of Jerusalem, annexation will surround Ramallah from three sides;  to the east, it will engulf Abu Dis and Azaria and will reach as far as Jericho; in the south, annexation will surround Bethlehem from three directions and disconnect it from many of the nearby villages. Thus, the area between Ramallah and Bethlehem – as the crow flies, a distance of merely 25 kilometers– will be broken up into five enclaves. The area of Jericho will be a sixth, separate enclave. The Palestinian cities will be disconnected not only from each other but also from significant parts of their surroundings and neighboring villages on which they rely politically, socially, economically and for future much needed urban development.
Furthermore- and most importantly- the disconnection of all of these enclaves from East Jerusalem will be solidified by road infrastructure and massive settlement construction.

This “enclavization” will result in the continued deterioration of the Palestinian
economy and will likely weaken Palestinian institutions. At the same time accelerated Israeli construction in the annexed areas may create an irreversible disconnection between those enclaves and East Jerusalem. A two-state solution will cease to be a viable option while the Palestinian Authority will have less and less ability to provide for the needs of the Palestinian population.

Accelerated settlement construction in E1 and other areas around Jerusalem
Israel will quickly advance settlement construction plans in the annexed areas around Jerusalem. Outline plans for such construction are already in different stages of approval. Much of the road infrastructure necessary for such expansion has been constructed in recent years with the investment of billions of shekels.
Due to their destructive impact on the possibility for a viable Palestinian state, the best known of these plans – are those for the construction of thousands of housing units in E1 between Jerusalem and the Maale Adumim settlement. The E1 plans has become a red line in international policies and for many years Israel had to withhold from advancing them. This has changed with the announcement of the Trump Plan which green lighted Israeli settlement construction in these sensitive areas. Indeed, two of the E1 plans with a total of 3,400 housing units have been recently deposited  after an eight year freeze.

But the scope of Israeli plans for the areas around Jerusalem is notably larger. In 2015, a Freedom of Information appeal by Peace Now revealed that the Ministry of Construction has hired planners for dozens of outline plans in the so called "settlement blocks" around Jerusalem:
- The area around Givat Zeev, northwest of Jerusalem
- Settlements along Road 60 such as Geva Binyamin and Kochav Hashachar, northeast of Jerusalem and cutting off Ramallah in the east
- Maale Adumim-E1, east of Jerusalem cutting off Jericho from East Jerusalem and Abu Dis from Ramallah
- Gush Etsion regional council, south of Jerusalem and surrounding Bethlehem.
The outline plans for these areas (currently in different stages of the approval process) contain a total of more than 30,000 housing units. These not only expand settlements but aim to create contiguous Israeli built-up areas that will prevent development of Palestinian towns and hugely disrupt the integrity of the Palestinian space.

The consequences of annexation will be far reaching. We have listed here what we perceive to be the most significant ones. As described above, if carried out, the annexation will have a twofold affect: On the one hand, it will further violate the most basic human rights of Palestinians both inside and outside the annexed territory and put whole communities at risk of displacement. On the other hand, it will exacerbate the detachment of the West Bank from East Jerusalem and deal another severe blow to the prospect of a future Palestinian capital in the city. Thus, even if "only" the Greater Jerusalem area were to be annexed, a future Palestinian state will cease to be a viable possibility and it will no longer be possible to consider the violation of international law and Palestinian human rights as temporary.
תגיות:
Annexation
Government Policy
Trump
Citizenship
Building and Planning
Absentee Property Law
E1
Maale Adumim
Khan al-Akhmar
Separation Barrier
Neighborhoods Beyond the Barrier
Greater Jerusalem
blog

2021 In Review: Israel's Policy In East Jerusalem
20.01.22 Reports
One Week After Advancement of Settlement Plans in Greater Jerusalem, Plans for Road Infrastructure in the Area are Deposited
blog
A Plan for Expanding Har Gilo Creates a Major New Threat for Al-Walaja
blog