Summary
On May 18, Israeli forces demolished at least three homes and three agricultural structures in Al-Walajeh on the southern edge of East Jerusalem. All of the demolitions took place on the Israeli side of the Separation Barrier in an area of roughly 1,200 dunams of Al-Walajeh land declared by Israel as the Nahal Rephaim National Park and touted as being "for the welfare of Jerusalem residents".
The demolitions were carried out despite the fact that currently no demolitions are taking place in East Jerusalem in accordance with the Ministry of Justice’s declaration from March 18 that demolitions of residential structures  will not take place during the COVID19 emergency situation. Furthermore, the home owners were not aware that any demolition orders were issued for their buildings.
It is likely that the demolitions were carried out as part of the preparations taking place for the opening of the Nahal Rephaim National Park to Israeli visitors, seeing as the Israeli Nature and Parks Authority (INPA) has been conducting extensive work on the site over the last couple of months. The national park will serve as a link connecting Jerusalem and the settlements in the Gush Etzion Regional Council around Bethlehem. This so-called "settlement block" is part of the Israeli vision for Greater Jerusalem and is among the areas targeted for annexation by the new Israeli government in accordance with the Trump Plan. The planned opening of the national park and the demolitions that it caused are a demonstration that Israel's intention to formally annex parts of the West Bank is accompanied by actions of de facto annexation, jeopardizing Palestinian communities and violating the most basic human rights of their residents.
Full Details
On May 18, Israeli forces carried out demolitions of residential and other structures on Al-Walajeh lands located on the Israeli side of the Separation Barrier. Israel declared this area, which sits on 1,200 dunams, as the Nahal Rephaim National Park in 2013.
This is the third time since January 2018 that the INPA has prepared to open the national park for Israeli visitors. During each of the previous two times (in February 2018 and October 2019),  plans for opening the park were accompanied by demolitions and arrests of Al-Walajeh farmers. In both cases, the park’s opening was suspended and subsequently, the harassment of the farmers stopped.
For the last couple of months, the INPA has been conducting extensive work on the "Visitor’s Center" of the national park, signaling its anticipated opening. Now, as in the previous instances, the harassment of the farmers has resumed. Since Friday May 15, at least three farmers were arrested in two separate incidents while working in their lands in the area declared as a national park. This is despite the fact that agricultural activity is explicitly allowed in the national park. On May 17, the demolitions detailed above took place. An Ir Amim researcher who toured the area on May 18 identified six demolished structures: three residential homes and at least three more structures used by farmers for shade and storage. The residents of two of the demolished homes were forced to abandon them several years ago due to the construction of the Separation Barrier and since then, were only able to visit their homes sporadically or use them when tending to their nearby olive groves. The third home was in the area where the Separation Barrier ends and access to it has not been restricted , therefore it was populated until its demolition on May 17.
The circumstances of yesterday's demolitions are outstanding in several aspects. The following points only strengthen the assumption that the demolitions were carried out as part of the preparations for the opening of the area for Israelis:
On March 18, the Israeli Ministry of Justice announced a near freezing of demolitions for the duration of the COVID19 emergency situation. According to a letter sent by the Ministry of Justice to the Association for Civil Rights in Israel (ACRI), demolitions of residential structures were to be completely frozen and the issuing of demolition orders were to be done only in cases of new construction. Indeed, in the last two months the Israeli authorities did not carry out any demolitions in East Jerusalem.
Even in "normal" times, Israel does not carry out demolitions in East Jerusalem during the Muslim month of Ramadan which is a month of religious significance and daily fasting. According to Ir Amim's records of at least the last four years, demolitions in East Jerusalem have consistently stopped during Ramadan.
None of the structures are newly built. At least two of them were constructed several decades ago and never had demolition orders issued against them in the past. The owners of the demolished structures were not aware of any demolition orders issued against them (and as mentioned above, issuing of new demolition orders is in contradiction to the Ministry of Justice's announcement).
Greater Jerusalem and Annexation
Al-Walajeh is located in the southern edge of East Jerusalem and in the vicinity of Bethlehem. Therefore, Israeli plans for connecting the settlements around Bethlehem to Jerusalem (the southern "settlement block" in the Greater Jerusalem scheme) target the village directly:
In Al-Walajeh, the Separation Barrier (completed in 2017) together with the Nahal Rephaim National Park (approved and developed in parallel to the construction of the Barrier) were designed to serve the Israeli vision of Greater Jerusalem: Israeli contiguity between Jerusalem and the settlements around it and breaking up of the Palestinian space into separate enclaves.
This is clearly seen in this map of the area: 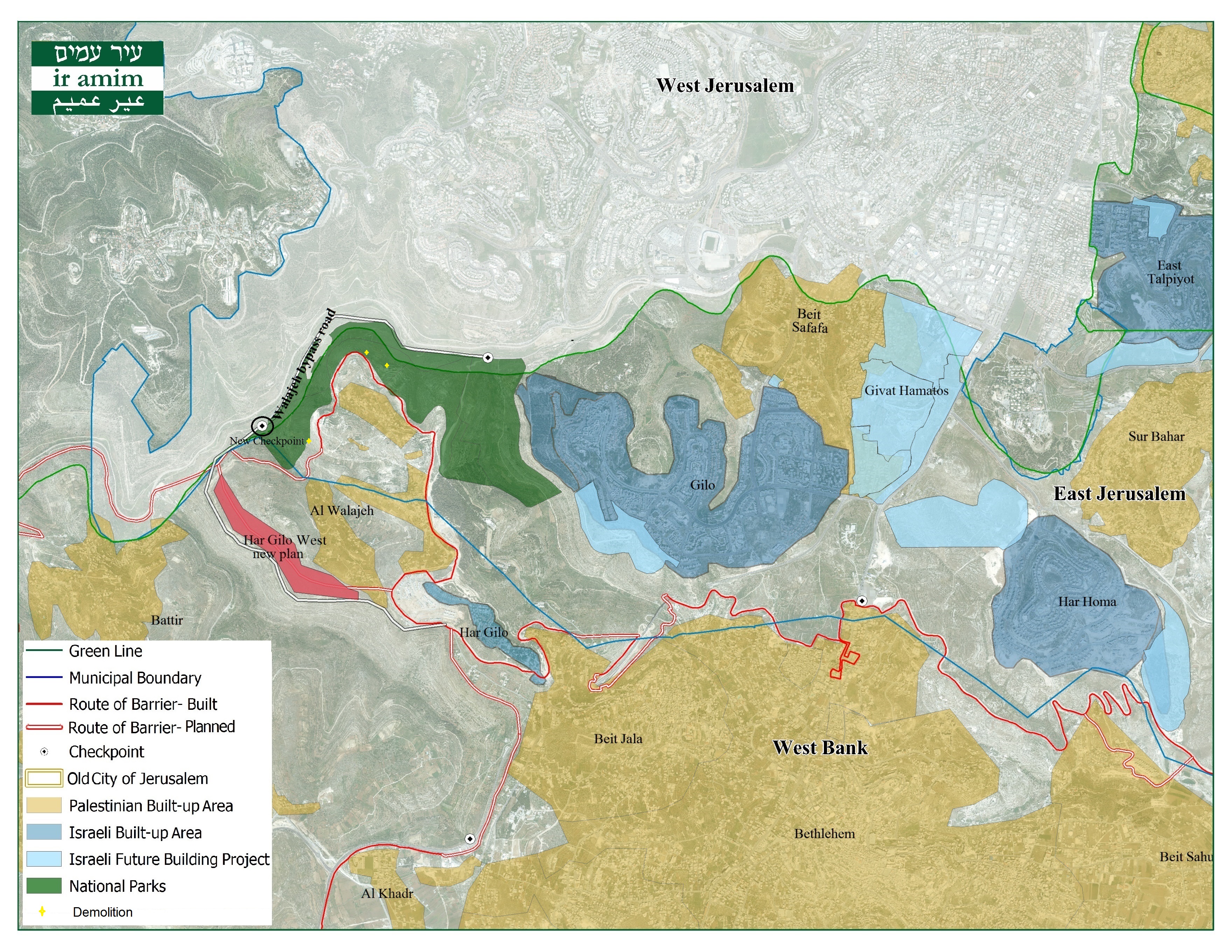 The Separation Barrier was constructed along a route that comes very close to the built up area of the village and surrounded it, meaning that Al-Walajeh has nearly become an isolated enclave. The Barrier also separated the built-up area of the village from roughly 1,200 dunams of its mostly agricultural lands. In parallel to the construction of the Barrier, the Israeli government and INPA declared the lands it cut off from the village to be the Nahal Rephaim National Park with the purpose of, as the park's documents stated, "serving  the welfare of Jerusalem residents".
The national park will function as a touristic settlement: It is a link that connects Jerusalem to the Har Gilo settlement in the Gush Etzion Regional Council. In recent years, Israel has advanced the creation of this contiguity through settlement construction in Gilo (underway) and Har Gilo (planned) and with construction of new road infrastructure. Thus, Israel is realizing its vision for Greater Jerusalem on the ground – de facto annexation – leading up to the planned formal annexation.
Today, Al-Walajeh residents are still able to access their lands on the Israeli side of the Barrier – but only by a long detour – since budgetary and other issues are preventing Israel from relocating a checkpoint so as to block Palestinian vehicles from reaching their lands entirely. This delay in relocating the checkpoint is also a main reason for the postponement of opening the Nahal Rephaim National Park –declared by Israel on the very same lands of Al-Walajeh - for Israeli visitors.
With the publication of the Trump Plan and the new Israeli government's declared intention to annex 30 percent of the West Bank, including the Gush Etzion Regional Council, Israeli authorities are once again attempting to begin operations for  the national park.
As is demonstrated by the recent days' arrests of farmers and home demolitions, Israeli plans for formal annexation come together with harsh measures of de facto annexation. Just like in Walajeh, these actions will have wide scale consequences for the Palestinian communities in and around the areas targeted for annexation.

More on Building and Planning

Two Months Before the End of the Year, 2020 is Already the Record Year for Home Demolitions in East Jerusalem
blog
One Week After Advancement of Settlement Plans in Greater Jerusalem, Plans for Road Infrastructure in the Area are Deposited
blog
A Plan for Expanding Har Gilo Creates a Major New Threat for Al-Walaja
blog