On March 5, the Israel Nature and Parks Authority )INPA) began digging in an olive grove adjacent to the road leading into Silwan along its main entrance bordering West Jerusalem in an area known as Wadi Rababe/Gei Ben Hinnom. Several residents of Silwan who claim to be owners of the olive grove demanded the digging come to an immediate halt.
Last week, the INPA submitted the land owners with a notice from the Israeli Custodian of Absentee Property stating that the aforementioned plot of land along with six other adjacent plots are under its authority and therefore authorized the INPA to carry out any necessary development work on the land (marked in pink on map below). The nature or details of the INPA's intentions for the area were not disclosed. The INPA's work in the area over the course of a few hours mounted to leveling a small area of land with shovels. The land owners' attorney appealed to the court and received an order to halt all work on the land until the issue of ownership is determined by the courts. A date for the discussion has yet to be set. 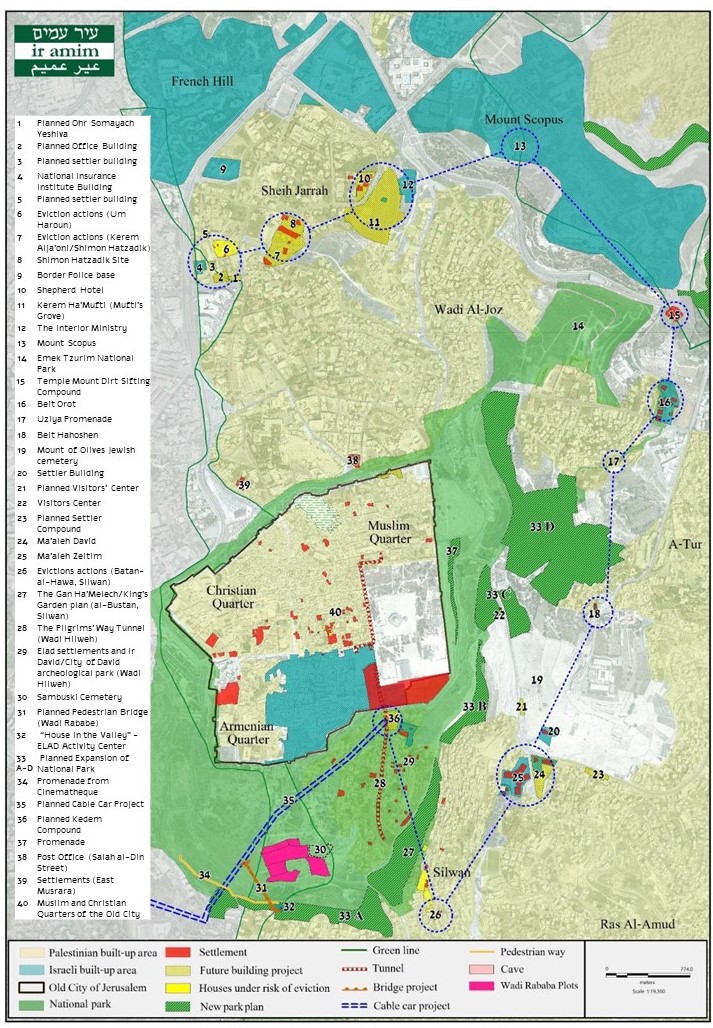 Integral Link between West Jerusalem and Silwan
As part of the intensifying band of settlement activity in and around the Old City, this area is of particular significance as it stretches along the seam between Silwan and West Jerusalem and serves as the main entrance into the neighborhood from the direction of West Jerusalem. Further blurring the Green Line, there has been an increase of touristic projects in and around this location promoted by the government and the Elad settler organization, which together create a more seamless link between West Jerusalem and Silwan.
In addition to the cable car (marked #35 on map) which will stretch from West Jerusalem over an invisible Green Line into the epicenter of Elad's touristic initiatives in Wadi Hilweh, Silwan, Elad likewise opened last year a recreational center and restaurant (“A House in the Valley”) (marked #32 on the map) strategically located in this area between At-thuri and Silwan. The planned pedestrian bridge (marked #31 on map) over Gei Ben Hinnom/Wadi Rababe is slated to originate from the Elad center and lead towards Silwan. The INPA’s work was carried out approximately 100 meters below Elad’s center and could eventually serve as a potential walking route between the center, the nearby Sambuski Jewish Cemetery (marked #30 on the map)  and the Elad-operated City of David (marked #29 on the map).
In light of its location, which serves as an integral link between these different projects, the INPA’s plans in Wadi Rababe could very likely be connected to the attempts to solidify control of this area and create a more contiguous Israeli space between West Jerusalem and Silwan.
​
Exploitation of the Absentee Property Law to Further Israeli Control
Moreover, this incident serves as another example of Israeli authorities exploiting the Absentee Property Law in an attempt to seize land in particularly the Old City Basin for such purposes.  The landowners of the aforementioned plots were neither notified that their land had been declared “absentee” nor had the opportunity to challenge it when the decision was supposedly made.
This is one of the legal mechanisms which Israeli authorities employ to evict Palestinian families from their homes, in particularly the Muslim Quarter and Silwan, and thereafter convey the properties into the hands of settler organizations like Elad. Based on this law, Elad succeeded in evicting the Siam family from their home in Wadi Hilweh in the summer of 2019, while in January, the Jerusalem Magistrate Court ruled in favor of evicting the Sumarin family in the same neighborhood on behalf of the Jewish National Fund.
Evictions of Palestinian families and the establishment of state-backed settler enclaves in the Old City Basin are reinforced by a growing constellation of touristic settlement sites, which together serve to further embed Israeli sovereignty in this area and foil the prospects of a future political resolution on the city.