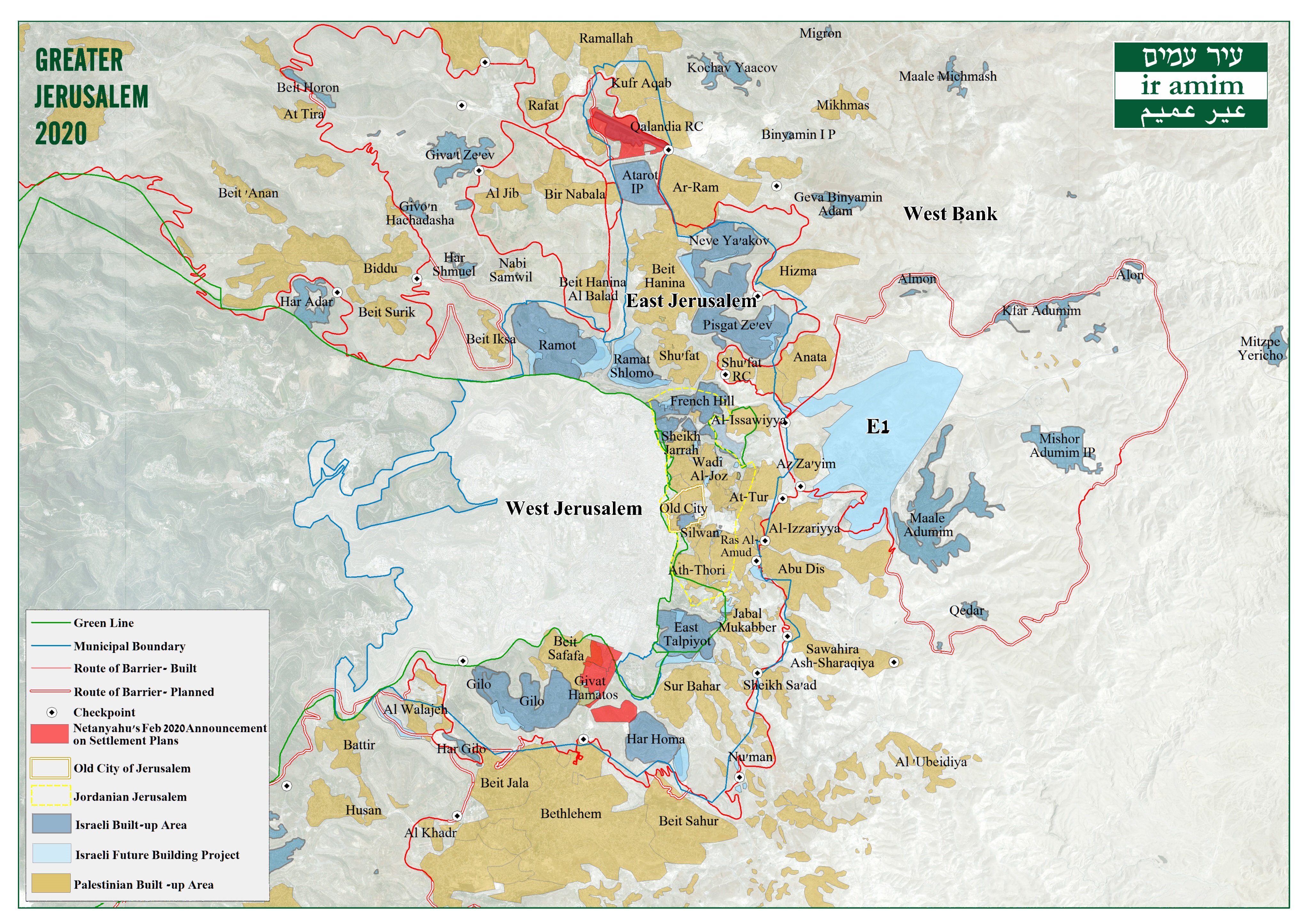 Construction of these two neighborhoods/settlements has been for many years a primary aim of Netanyahu's governments. If advanced, these new settlements will essentially connect the existing Gilo and Har Homa neighborhoods/settlements and create a contiguous Israeli built-up area along the southern perimeter of East Jerusalem. This will serve to detach Bethlehem and the south of the West Bank from East Jerusalem while isolating the Palestinian neighborhood of Beit Safafa. Constituting a long term strategy of Israeli governments, construction of large settlements is employed as a means to fracture the Palestinian space and unilaterally determine the boundaries of Jerusalem to prevent the future establishment of a Palestinian capital in the city.
For several years the advancement of these two settlements has been frozen, serving as a source of frustration among right-wing parties. Netanyahu's announcement therefore constitutes a break in the longstanding restraint and follows closely on the heels of the recent revealing of an outline plan for a new settlement in Atarot (9,000 housing units) on the northern edge of East Jerusalem (likewise marked in red on map). In one week alone, Israel has expressed its intent to advance new settlement building, comprising a total of 14,200 housing units, in the most sensitive locations, which will effectively seal off East Jerusalem from the West Bank along its northern and southern axis.
Netanyahu's statement should be seen in the context of his re-election campaign and against the backdrop of the formal release of the US Peace Plan. Although the plan calls for a supposed four-year settlement freeze in parts of the West Bank, its affirmation of Israeli sovereignty over Jerusalem it its entirety has emboldened Netanyahu and his government and essentially given it carte blanche to further carry out unilateral measures of settlement expansion in East Jerusalem. In doing so, Israel advances its long-term territorial and demographic objectives in taking over more land for further Israeli settlement in East Jerusalem, which serves to augment the Israeli population, while curbing the Palestinian demographic and residential development and thwarting any future prospect of a Palestinian capital in the city.
Likewise, some of the developments in recent weeks in the European arena could be interpreted by Netanyahu that a more lenient stance towards such plans is beginning to emerge.
At the same time, an examination of existing outline plans in Har Homa and Givat Hamatos, however, indicates a gap between Netanyahu's declarations and what can actually be carried out in the near future.
Givat Hamatos
Netanyahu claimed to advance the construction of 3,000 housing units, 1,000 of which "for immediate tendering within a few days." The plan (TPS 14295) for 2,610 housing units on state lands in Givat Hamatos received final approval in 2014. Since then rightwing groups have consistently demanded the publication of tenders for construction in the area. However, any building of housing units can only take place subsequent to the construction of infrastructure, which has yet to be carried out.
Har Homa West
For the area designated as Har Homa West, which would extend the existing part of Har Homa westwards towards Givat Hamatos, there is no approved outline plan and therefore no possibility for immediate construction. Over the years, there has been a demand from the rightwing to advance planning within the area, yet no plan has been promoted for discussion at the respective planning committees. If such a plan were to be initiated now, it would first need to be prepared for discussion and then pass through the various stages of the planning process, including deposit and discussion of objections, before reaching any final approval. Likewise, the property in question is owned by multiple landowners, which would require a reparcelization ("consolidation and distribution") process, adding to the already lengthy timeframe.
Yesterday, an agenda was published for the Jerusalem District Planning Committee session scheduled to take place on February 27. The agenda includes discussion of "skeleton" plans for both Har Homa West and Givat Hamatos, but it is unclear as to what these new plans specifically entail. Regardless, they would both require a lengthy review process and their potential approval would not allow for the publication of tenders and issuance of building permits, which can only happen with the approval of a detailed outline plan.
What Can Happen Immediately
Further details as to the nature of the two new plans will emerge following the committee session on February 27. However, no construction in Har Homa West can take place in the coming year and will most likely take even longer. Likewise, it is very unlikely that tenders for residential construction can be opened for bidding in Givat Hamatos since construction for the necessary infrastructure has yet to begin. In the meantime, the Israel Land Authority could potentially publish tenders on its website without actually opening them up for bidding and/or publish and open tenders for construction of infrastructure.
Although Netanyahu's declarations are not likely to materialize into immediate construction, these developments are no less alarming and should be seen as indicative of the new reality created following the release of Trump's Peace Plan. After years of restraint due to international opposition, Israel is now set to advance construction plans in the southern perimeter of Jerusalem, which has remained a longstanding international red line. The realization of these plans will serve as an immense obstacle towards the future establishment of a Palestinian capital in the city and the prospect of a negotiated agreement based on a viable two-state framework.
תגיות:
Greater Jerusalem
Givat HaMatos
Har Homa
Building and Planning
Settlements
Negotiations
blog