Today, the Local Planning Committee is projected to approve the seizure of 32 dunams of land in Sheikh Jarrah for the purpose of establishing “Hakidron Park.” Expropriation of the land is based on TPS 2591 and TPS 8620, which designate the area as open public space. The “Hakidron Park” concept appears in various government decisions announced over the past 10-15 years “for the strengthening of Jerusalem.” These decisions allocate hundreds of millions of shekels for creating touristic settlement sites around the Old City. Today’s expected approval will mark the first step in implementation of the “Hakidron Park,” which will be established close to Sheikh Jarrah's northern entrance (point 11 on map below) adjacent to the Shepherd Hotel project, a residential settler compound belonging to the Ateret Cohanim settler organization (point 10 on map below). A decade ago, the Israel Land Authority leased part of the area planned for expropriation to Ateret Cohanim.
The Local Planning Committee is likewise anticipated to approve today the confiscation of 1.3 dunams of land in Ras al-Amud (based on TPS 470484) adjacent to the Mount of Olives Jewish Cemetery for the purpose of establishing another visitor information and religious services center (point 20 on map below) on the Mount of Olives. While the plan is under the purview of the Municipality and Jerusalem Development Authority, the Municipality’s hiring of Arie Rahamivov, the architect for the Elad settler organization’s planned Kedem Compound in Silwan, indicates settlers’ likely involvement in the project. Elad operates another visitor center on the Mount of Olives in close proximity, one of a growing number of tourist sites in the Old City Basin under its management.
Approval of the aforementioned land expropriations would signal intent to begin construction at both sites and will help to further solidify the settlement ring around the Old City Basin. While both plans can be posited as innocuous municipal initiatives to serve local residents and visitors to the areas, such touristic projects play an integral role in expanding the scope of settlement strongholds in the area and creating a more contiguous Israeli space, while diffusing the political agenda behind these efforts. 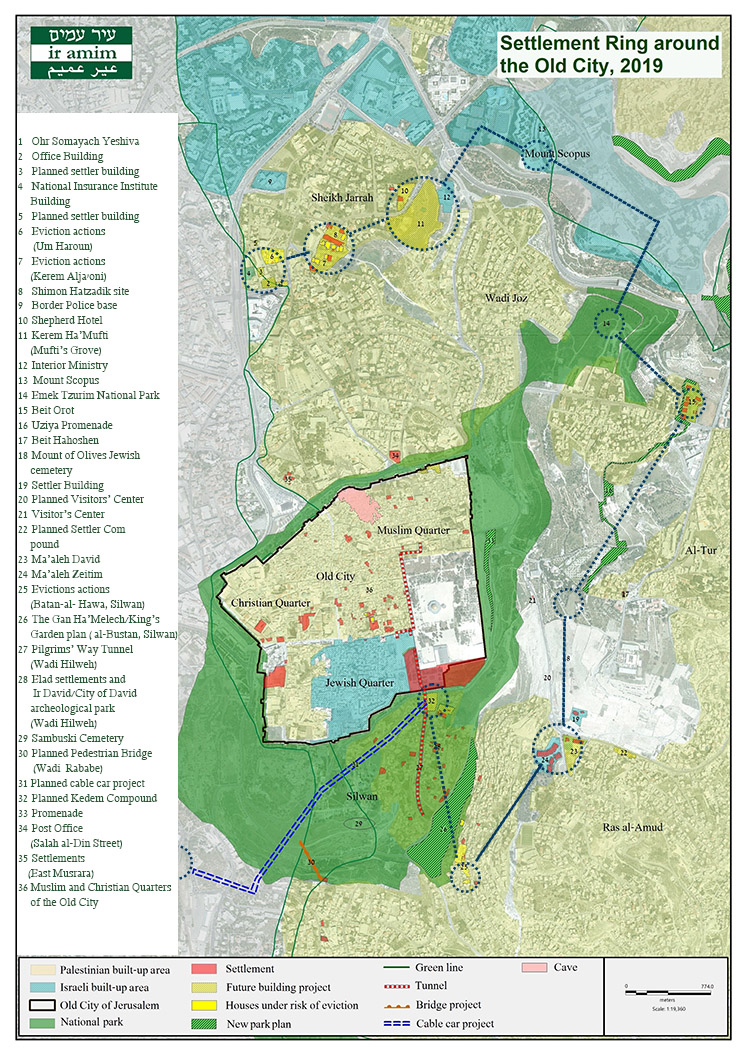